LOCATION:
Bluebell Wood is located in North Anston, near Sheffield and is part of Together For Short Lives, formerly known as Children’s Hospices UK.
www.togetherforshortlives.org.uk

HOW INITIAL CONTACT WAS MADE:
Having been working with the Together For Short lives group since 2010, and having completed four home cinema installations in 2011, the group had agreed to report on this success in their monthly newsletter to all of the 47 children’s in their group. This was sent early in 2012 and the response was most encouraging with 7 hospices replying immediately expressing their interest in having the AV industry help to install a home cinema room. Most of those that replied had heard of the work that we have been doing and rather it being a ‘semi-believable’ offer I think they were aware that it was a very real and serious offer of assistance. It was in April 2012 that Sarah Champion, their Chief Executive, initially contacted me and this was followed up with myself and Colin Scott from ET Home Cinema visiting the hospice on Thursday 26th July.

HOW THE INSTALLER / PROJECT MANAGER WAS FOUND:
Following an email sent by CEDIA to their members in Spring of 2011 Colin Scott of ET Home Cinema contacted me and expressed his interest in helping to project manage one of the children’s hospice cinema installations. At the time I didn’t have a suitable project for Colin and his team to manage though I kept him on record as an installer who was willing to help in the Yorkshire area... Then, in April 2012, Sarah Champion, chief Executive of Bluebell Wood, approached me and with Colin’s willingness to help it was a very easy match to make... A big thank you must go to CEDIA for their help in publicising our work to their members...

INITIAL MEETING AND SPECIFICATION:
On Thursday 26th July, 2012 Colin Scott and Pete Gleadhall from ET Home Cinema, and Ian Morrish met with Sarah Champion at Bluebell Wood to view the prospective room and consider what options would be suitable for the install. On arriving we were welcomed very warmly and then taken to a room full from floor to ceiling of beds, toys, chairs etc... It was hard to picture exactly what could be achieved but after some shuffling of beds and a bit of investigation Colin and Pete had a vision..., and one that went beyond a regular cinema install...

SOURCING OF PRODUCT:
With the wonderful vision that Colin and Pete had the product list required for this installation was looking pretty daunting once it was specified. Not only all the AV products required for the cinema but also timber, LED lighting and the fibre optics. We also had to recruit a carpenter to make the screen and lighting shields and also the seating panel under the screen to house the front and centre speakers. However, with a division of labour, and the use of some products that had already been promised, we felt the ambitious project would be a ‘definite possibility’!

Brands such as Control4, Sapphire Screens, Kaleidescape, Humax, HD Cable, Yamaha, Monitor Audio, Premier Mounts, Draytek and JVC (thank you James Johnson-Flint for your assistance here!) all generously stepped up and contributed for the first time, and this backed up with the old favourites of Lutron, NAD, Middle Atlantic (via RGB Communications) and Velodyne (via Redline) made the vision a reality... The only frustration was a customs import issue with getting the Kaleidescape equipment released for delivery..., though Kaleidescape in the UK kindly stepped in and resolved this for us! Thank you again...!

The balance of the equipment required was pulled together by Colin and his team at ET Home Cinema and included contributions from Hoyland Joinery, Travis Perkins, Dearne & District Digital, Starscape and City Electrical Factors.

An ambitious kit and service list indeed, particularly when we had no budget at all! Everyone’s generosity of both time and product has been staggering and has helped to create a very special cinema room that will be used and enjoyed by the kids and their families for many years to come...

THE INSTALL
“After an initial survey at Bluebell Children’s Hospice, Colin Scott  and Peter Gleadhall came up with some proposals to get the best from the room space. It was decided to construct a box section below the screen to house the front speakers, a pelmet to hide the screen and box section along the sides of the room to hide some heating pipes. This also provided a means of installing RGB tapelighting to create various mood lighting scenes in the room.

A rack unit at the back of the room houses all the audio/video, network and control equipment.

ontrol of this equipment is via a Control4 Touchscreen. There is also a media plate located at the front of the room to allow for devices such as Wii where a sensor bar is required under the screen.

At a press of a button on the Control 4 Touchscreen the electric screen lowers from behind the pelmet, LED’s, Fibre Optics and Downlighters go to a pre-programmed scene, select a movie from the Kaleidescape server and it’s time to grab the popcorn!”
Colin Scott, ET Home Cinema

CUSTOMER COMMENTS:
“We are absolutely thrilled and delighted with our fabulous new cinema room and can’t thank everyone enough who made this possible. It will provide hours of entertainment for our children and families using the hospice, and it provides a great auditory and visual sensory experience for our children with the mood lighting and surround sound in the room.”
Heidi Megaughin, Acting Chief Executive, Bluebell Wood Children’s Hospice

INSTALLER COMMENTS:
“This has been a thoroughly worthwhile and enjoyable project to be involved with, and would like to thank Ian Morrish and everybody else who helped make this project happen.”
Colin Scott, ET Home Cinema

THANK YOU to you all!! …you have all helped create a little bit of magic at Bluebell Wood Children’s Hospice.

FINANCIALS:
All products and services were sourced, supplied and installed free of any charge. The approximate total cost of the install, including consultation, installation, products and any other associated costs would normally have been in the region of £13,000 for an end user price.

ET Home Cinema have also committed to be available for any servicing and technical queries post install.

SUMMARY:
The Bluebell Wood installation has been a great success and a great pulling of resources from many individuals, and from several different trading sectors..., and for this we thank Colin Scott at ET Home Cinema who has managed to generate support from many local companies outside the AV sector.

It’s great to hear the positive feedback from everyone at Bluebell Wood about how the children and their families have enjoyed their new Cinema Room and I know that many more will do so in the future.

Finally, my thanks to must go again to Colin Scott and his team at ET Home Cinema and all the manufacturers that supported the project – I can confidently say that your efforts, and combined generosity, will make a difference to all those that use the room for many years to come..., and this is something that we should all be very proud of. 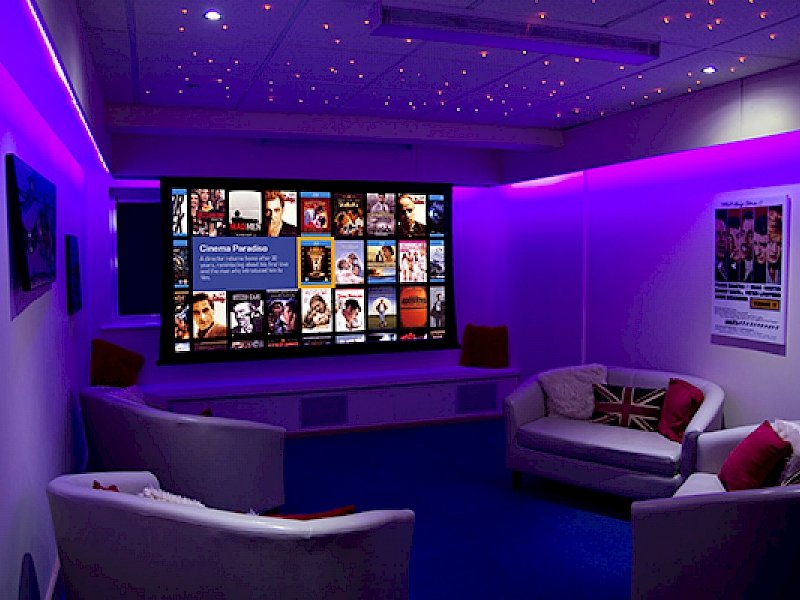 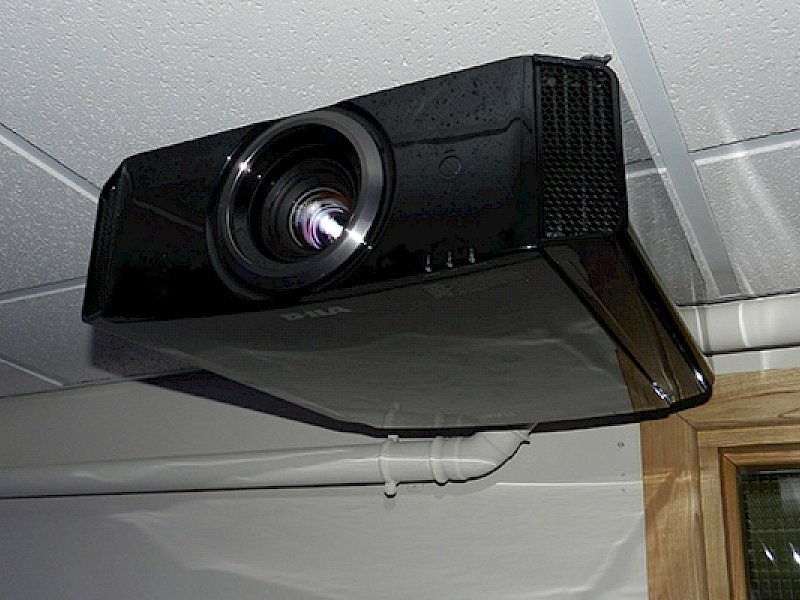 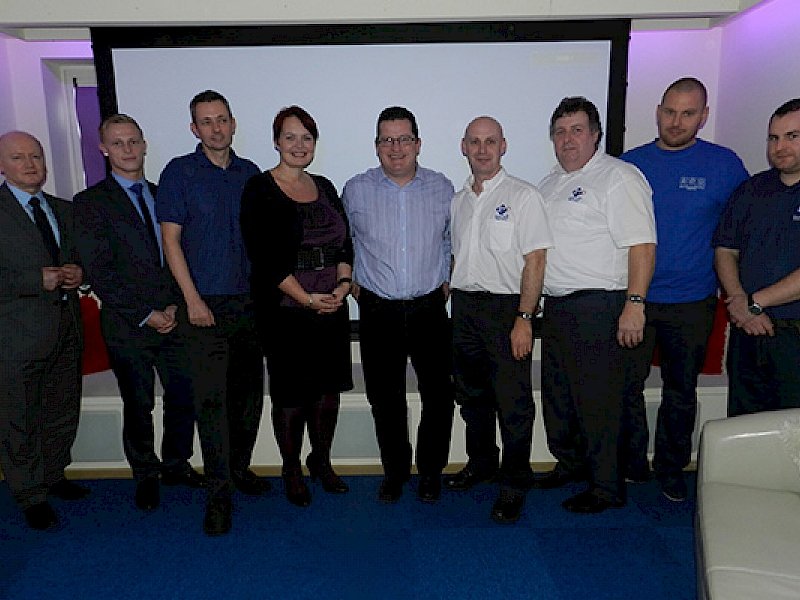 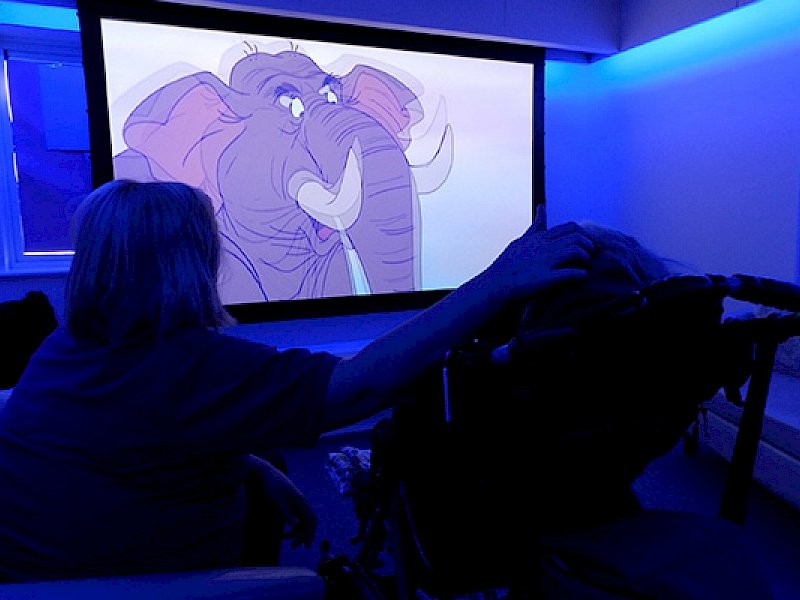 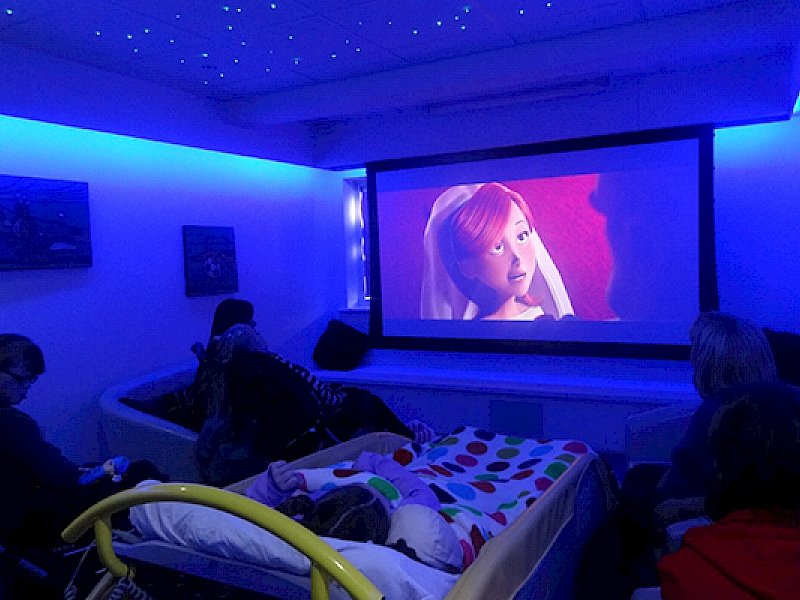 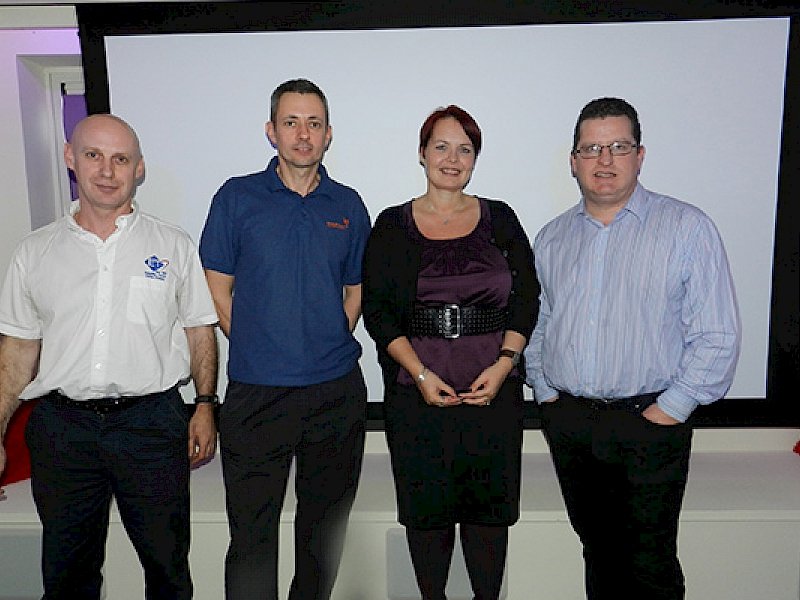 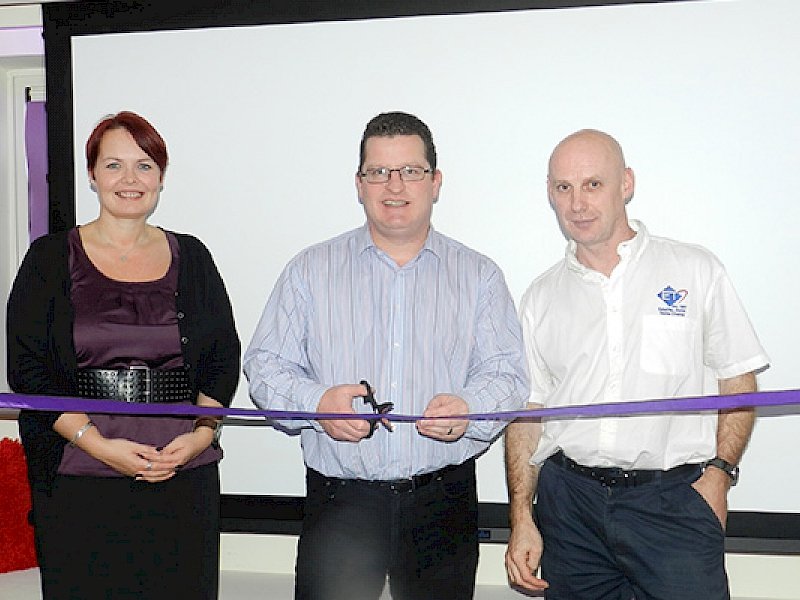 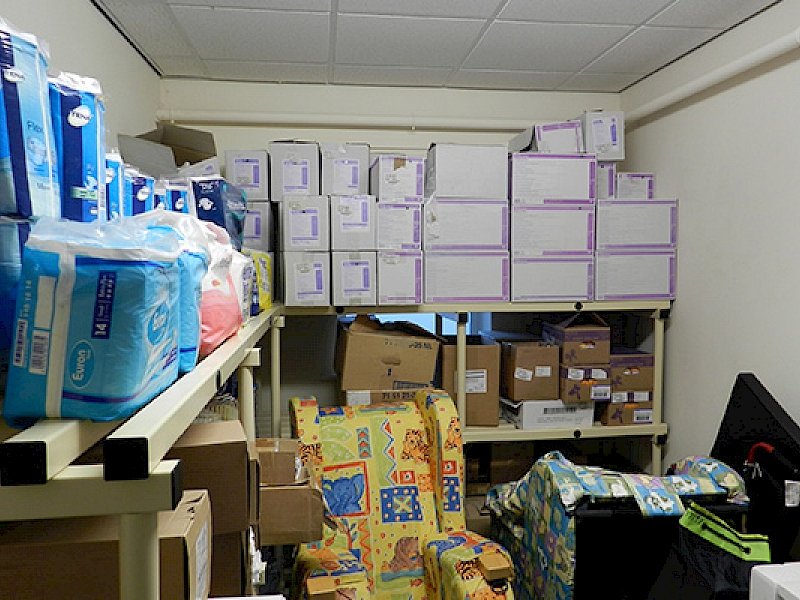 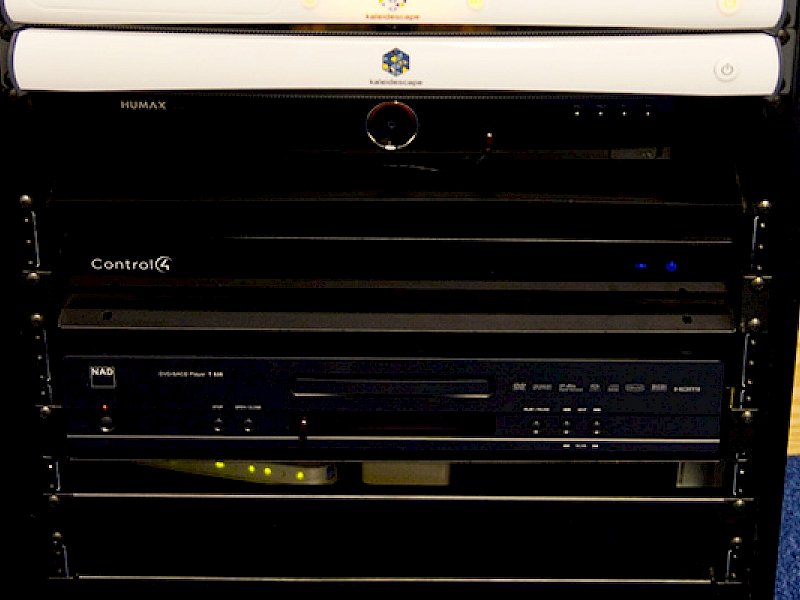 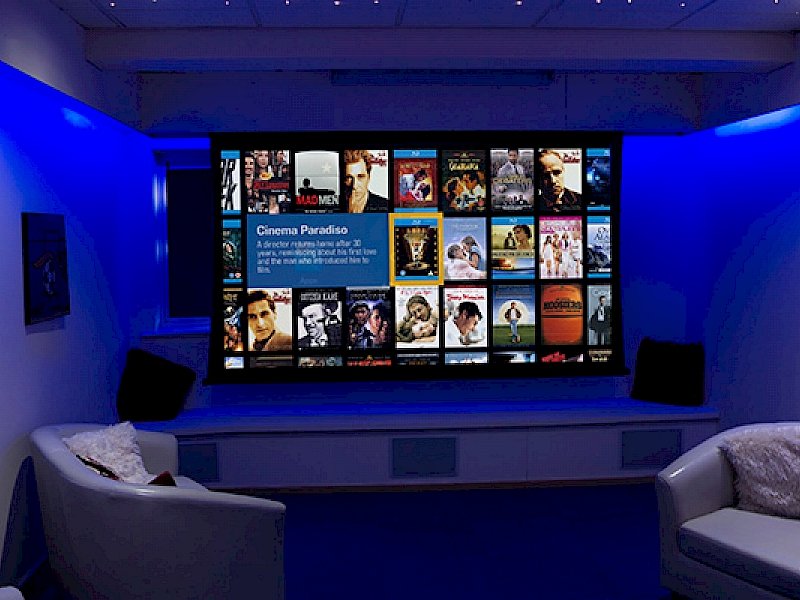 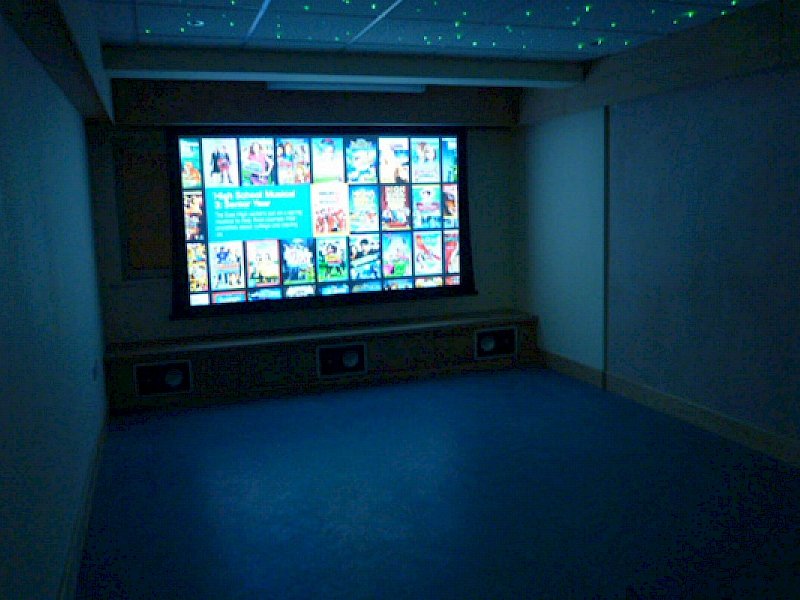 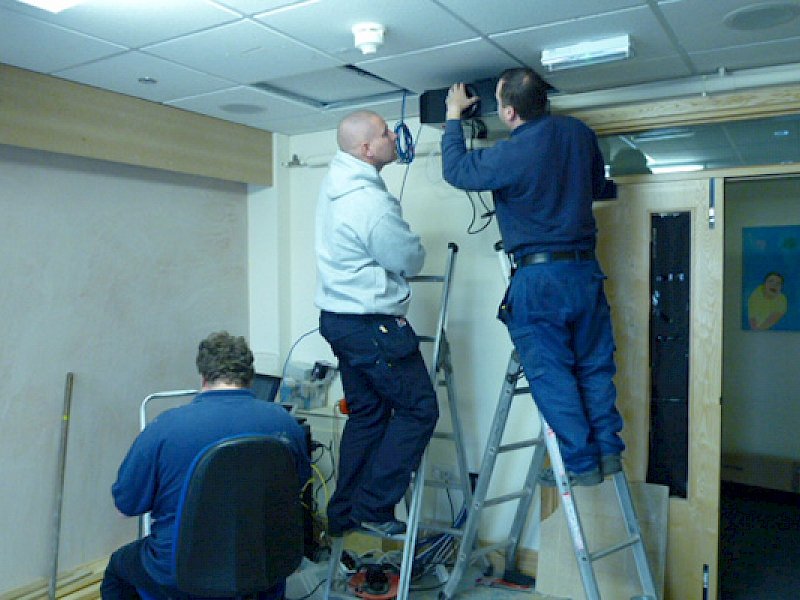 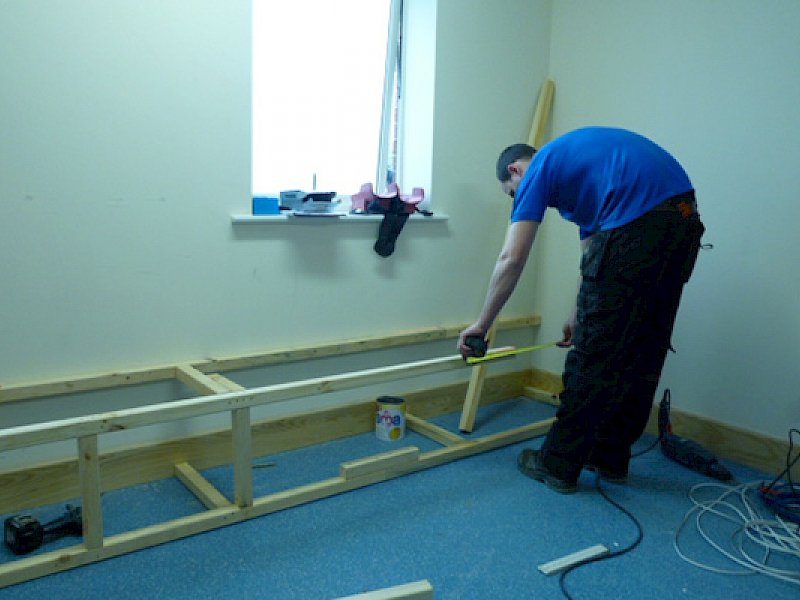 Building The Room Out

With Thanks To Our Sponsors On This Project

Arcam exists for one simple reason: to bring the best possible sound into people's lives, whether from movies or their favourite music.

Our technical expertise and highest levels of customer service ensure we design and install systems that completely fulfil your aspirations of home and lifestyle.