Charlton Farm was opened in 2007 and is located in Wraxall, just to the west of Bristol and is one of Children’s Hospice South West (CHSW) three locations in the South West of England. The others being Little Harbour, opened in 2011, in St.Austell and Little Bridge House in Barnstable, being the first opened in 1995.

These three locations provide hospice care for children with life-limiting conditions and their whole family across the South West. The care offered is wide ranging; respite and short breaks, emergency care, palliative care and end of life care.

Some families may use the hospice for many years, from the time the child is first diagnosed as having an incurable condition which will mean they will die in childhood. The whole family can stay at the CHSW hospices, and with a dedicated sibling support service available, this means that the well brothers and sisters can be cared for during their visit and enjoy spending time with other children in similar situations to their own.

The support given extends to the whole family, into bereavement and beyond for as long as each family needs it. With more than one thousand life-limited children across the South West, this support for families is absolutely vital.

Her Royal Highness The Duchess of Cornwall is the Patron of the Charity and quickly understood that these are not sad places but very uplifting with an aim to make every minute as special as it can be…, after all, some of the children have precious few remaining…

It was April 2012 when Together For Cinema was first contacted by Charlton Farm following an email circular from their umbrella charity Together For Short Lives. Sadly nothing materialised at the time but a couple of years later we were very close to helping with a cinema installation at Little Harbour in St.Austell. We even had a meeting in St.Austell but sadly we were unable to move forward, however, the contact had been made… Following more recent contact in December 2016 a defined plan was made for Charlton Farm and there was full go ahead to convert their Games Room into a Cinema and Home Entertainment multi-function room.

Having known Adrian Ickeringill for many years (as many of us in the AV industry have!), we had had many conversations about the development of Together For Cinema. Adrian had already been very supportive with any products that we needed from the Wyrestorm range and had been keen to do more by taking responsibility for a specific installation if he could. With this in mind, and when an install came up relatively close to his offices, it seemed a natural match. Needless to say, Adrian and the team at Wyrestorm jumped at the chance to get involved.

In order to progress things a meeting was set up at the end of January 2017 between myself, Ian Walsh from the care team, and Steve Benson, the onsite IT technician at Charlton Farm, and also Adrian Ickeringill and Dave Schorah of Wyrestorm. I met Adrian and Dave at Swindon and we drove down together giving us time to discuss what would be needed in terms of making it happen and also of course any post installation responsibilities.

We arrived at Charlton Farm at about 11.30am and we’re greeted very warmly and we’re taken to the Entertainment Room which immediately we all agreed would work with a cinema upgrade, whilst still maintaining its multi-functionality. As with most installations one or two small challenges were identified but nothing insurmountable. Time scales were discussed and with ISE in February we agreed to give ourselves 2-3 months before starting the installation, but of course we began to rally the industry and gather the required products…

With the years of AV industry service amongst us we all felt very optimistic that we could generate the products required to create an excellent cinema room and cinema experience at Charlton Farm. The kit list was fairly ambitious, particularly as we needed to secure all of the product free of any charge. With no money ever changing hands at Together For Cinema everything needs to be donated, be it product, time or anything else required!

We set about the task to source all the items required and were again delighted that all requests were met and agreed immediately. Many of our long supporting manufacturers were happy to help again and this included the likes of Monitor Audio, Middle Atlantic (via RGB Communications), Arcam, Epson, Dataflow, QMotion and of course Wyrestorm. Along with these hugely generous companies the likes of NAD, iRoom and Enado also stepped up and donated.

With each installation being so different there is always the will to make it happen and as we know ‘where there’s a will there’s a way…’ This, aided by having the right contacts meant we were quickly able to secure all the products required.

“Having been involved over last couple of years in supplying extenders for the Together for Cinema project, as a team, we wanted to help further with such a worthy cause. When the Charlton Farm Cinema came up, local to our offices, it was a great opportunity for the Wyrestorm team to cover. Following a site visit prior to ISE and busy post ISE schedule, we fixed dates to attend. The existing system involved a very basic speaker system, with broken projector and some gaming machines. Through the generosity of the vendors involved, we were able to quickly revolutionise the system.

“The Games Room at Charlton Farm was transformed by Together for Cinema into the perfect cinema. This is something that children and adults of all ages will use for many years to come as it has added that extra dimension for the families and affected children here at Charlton Farm. The cinema is wonderful, not only does it provide a sensory experience for our children but provides a huge joyful boost for the siblings. We cannot thank the installation team enough for their time and effort in getting everything ready, the time they spent at Charlton Farm getting all the fabulous kit up and running was just amazing but the biggest thank you goes to Together for Cinema and Ian Morrish for organising all this from scratch. It was an incredible job from the outset and we will be forever thankful for all the pleasure it has already given to families and children who have stayed here and who will stay in the future.”

“Still have some final hurdles to finish off, in getting the Sky signal from the main building onto the network via Network HD and into the Cinema room, once the network has been updated, but everything else is up and running.

Now the system is in place and being used by staff and family staying at Charlton Farm, it is wonderful to see the impact it is having. It was a great honour to be involved in such a brilliant charity as “Together for Cinema” and we would highly recommend installers to volunteer with local Hospice’s as it makes such a difference!”

On top of the list above many other products and accessories were generously donated by Wyrestorm.

THANK YOU to you all!! …you have all helped create a little bit of magic at Charlton Farm.

All products and services were sourced, supplied and installed free of any charge. The approximate total cost of the install, including consultation, installation, products and any other associated costs would normally have been in the region of £18,000 for an end user price. Wyrestorm have also committed to be available for any servicing and technical queries post install. 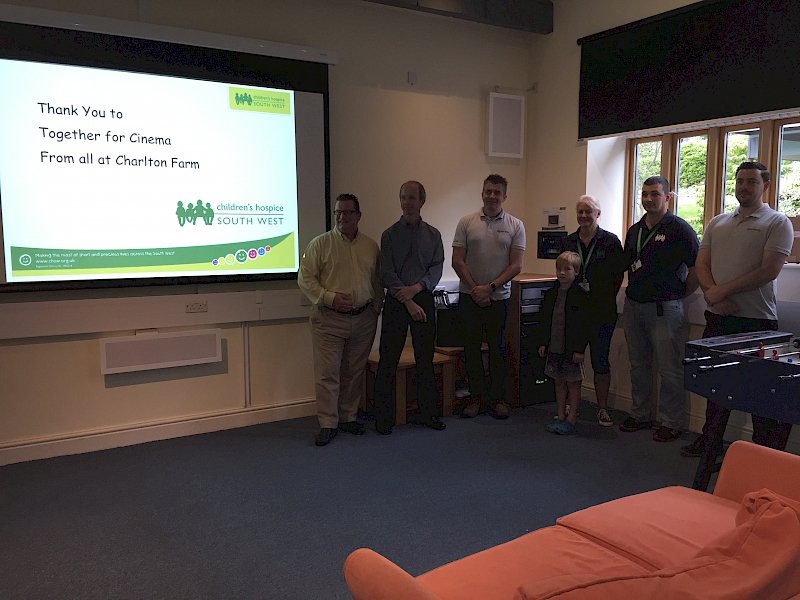 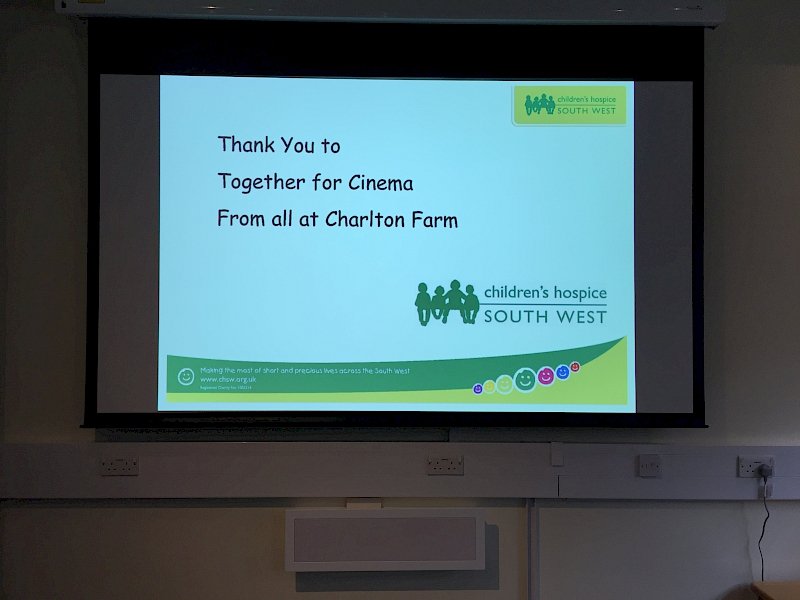 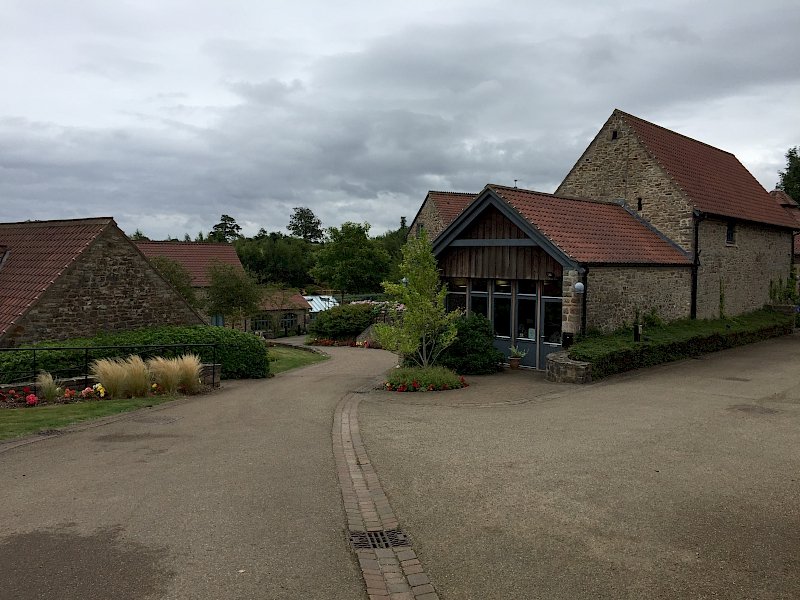 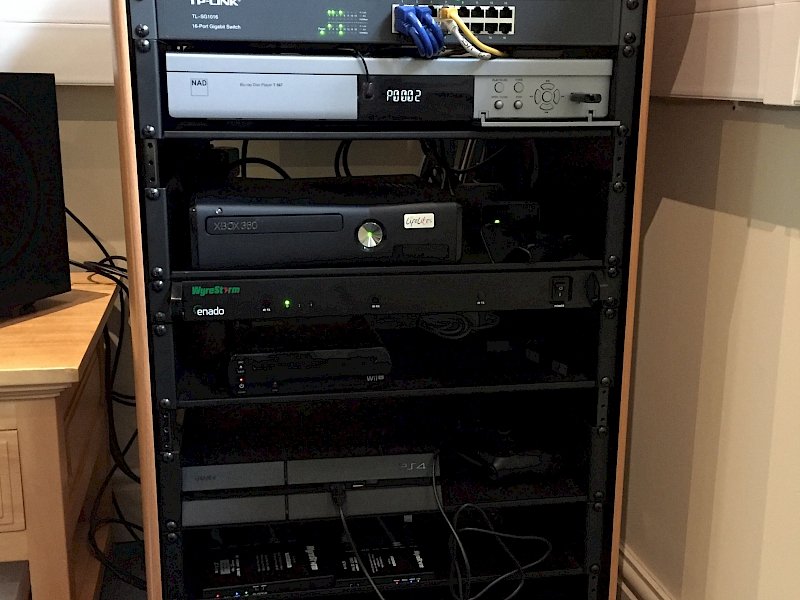 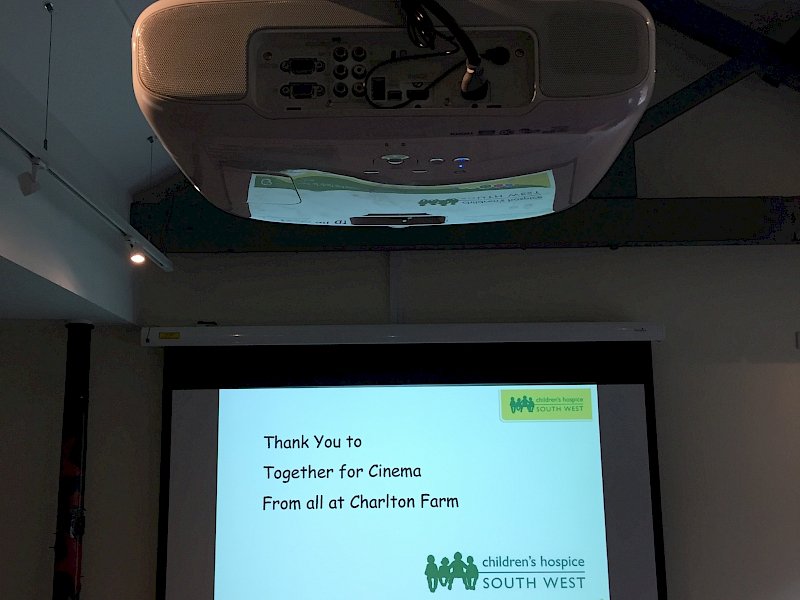