Chestnut Tree House is located in Arundel, West Sussex and is part of Together For Short Lives, formerly known as Children’s Hospices UK.

Having been working with the Together For Short lives group since 2010, and having already completed eight home cinema installations (we/re now at 12…), the group had agreed to report on this success in their monthly newsletter to all of the 47 children’s in their group. This was sent early in 2012 and the response was most encouraging with 7 hospices replying immediately expressing their interest in having the AV industry help to install a home cinema room. Most of those that replied had heard of the work that we have been doing and rather it being a ‘semi-believable’ offer I think they were aware that it was a very real and serious offer of assistance. It was in April 2012 that Sarah Arnold, their Corporate Fundraising Manager, initially contacted me and this was followed up with myself and Iain Brown from Kensington Home Technology visiting the hospice on Thursday 16th May.

Following further email communication sent by CEDIA to their members in Spring of 2013 Iain Brown of Kensington Home Technology contacted me and expressed his interest in helping to project manage one of the children’s hospice cinema installations. At the time of Iain’s contact I was trying to establish which of the children’s hospices that had requested our assistance we could work with. With Iain’s willingness to help, and over a wide area, it was a very easy match to make... A big thank you must go to CEDIA for their help in publicising our work to their members..., and subsequently bringing Iain to us, who has already committed to further involvement!

On Thursday 16th May, 2013 Iain Brown, from Kensington Home Technology, and Ian Morrish met with Sarah Arnold and her colleagues at Chestnut Tree House Children’s Hospice in Arundel to view the prospective room and consider what options would be suitable for the install. We arrived by train on a glorious day and were picked and taken to Chestnut Tree House. We were welcomed very warmly and then taken to a large room that proved to be ‘reasonably’ well suited for a cinema installation. The main concern being the amount of daytime light pollution, but this was easy to overcome…

With Iain’s energy and enthusiasm to make this happen it became a fast and furious few weeks after our visit to draw up a preferred product list and then go out to our industry contacts to see what we could gather.

With Iain being generally involved with the more ‘high end’ residential installations his product taste was also fairly high end! ‘No problem’ I confidently stated and within a week or so Iain had already secured half of the equipment required! Then the pressure was on me to beg the rest, which, with the wonderfully generous contacts we have, didn’t prove to be too much of a challenge.

An ambitious kit list indeed, but with the right contacts, and a lot of generosity and goodwill, we were able to secure all the products required fairly swiftly. A big thank you to all that have helped to create a very special cinema room that will be used and enjoyed by the kids and their families for many years to come...

“There were a number of challenges in carrying out the install…

Access to the room was limited as the room has many uses and therefore our time on site was limited to a couple of days. In that time we had to run all the cables, install the hardware, commission the system and test everything.

Our suppliers were very generous and we were keen to maximise the hardware to give the best experience possible for the children, notwithstanding the fact that the room was not ideal.

The biggest challenge was always going to be getting the speakers in the ceiling and running the cables – and this proved to be the case. With some clever fishing and a great deal of perseverance Paul A, Dan and Aaron managed to get all 7 speakers installed, the projector mounted and wired and all cables installed in good time.

Hanging the projector was complicated because of the suspended ceiling and we had to engineer a custom mount in Ken’s workshop to give the secure mount we needed. The ceiling height in the room is not that big so we needed to get the projector as close to the ceiling as possible.

We had already prebuilt the Middle Atlantic credenza cabinet in the office and Paul G and Jorge built the rack and wired the system so that by the end of day one we had finished the main parts of the install. It was a long day but it was important to get these works completed on the first day so that we could focus on the control and setup on day 2.

On day 2 we finished the racks, installed the trunking for the surface mounted cables and then spent time configuring the speakers to get the best sound possible in the room.

Everything was finished, except for the programming, in the time we had; which meant our programmer had to return separately to install the software and get the control system working. We had to do a few updates on line which took a while through the site router but once this was done the software went in first time and worked perfectly.”

Final amends and installation of lighting will be completed at a later date.

“The new cinema installation will make a huge difference to the children and families who use Chestnut Tree House. We have been using our computer room to show films but space and availability to use the room for this purpose have always been quite limited. For families caring for a sick child, a trip to the cinema is extremely difficult to organise which means that the whole family tend to miss out on an experience many of us take for granted. The new installation will mean that many more children and families can enjoy the simple pleasure of watching a film together without having to worry about things like transport and access for their poorly child, whilst still having the full medical support of the Care Team close at hand. It will be like having our very own cinema at Chestnut Tree House and we are looking forward to our first film premiere on Friday 17 January when we will be inviting children and families to a showing of Despicable Me 1 and 2!”

“I read an article about these projects in a CEDIA magazine and I knew I wanted to be involved. I spoke to Ian Morrish and we identified Chestnut Tree House as a suitable site. Ian insisted that I needed to go to site, not only for technical reasons, but also to fully comprehend the work that these homes do. I have to say I was very nervous about the trip, and being a parent, I was concerned that I would find the visit upsetting and uncomfortable.

My preconceptions were completely misplaced. The positivity and care from the staff and the volunteers made a big impression on me. Everything was geared up to give the children the best time possible - all the time. Nothing was too much trouble.

I left knowing that this was a project we had to do.

The reaction from my suppliers to my request was amazing. Everything I asked for was giving willingly – I would have expected nothing less but it was heart-warming that people still want to help.

Like all installs there were a few difficulties to overcome but the can do attitude of our install team meant that it all went pretty smoothly.

The whole experience has been very positive, both for me personally, but for the company as a whole – and we can’t wait to start the next one!.”

All cables, mounts and other accessories were donated by Kensington Home Technology

THANK YOU to you all!! …you have all helped create a little bit of magic at Chestnut Tree House Children’s Hospice.

All products and services were sourced, supplied and installed free of any charge. The approximate total cost of the install, including consultation, installation, products and any other associated costs would normally have been in the region of £21,000 for an end user price.

The Chestnut Tree House installation has been a great success and a great pulling of resources from many companies and individuals... For this we thank Iain Brown from Kensington Home Technology, and his team, who have made this happen.

It’s great to hear the positive feedback from everyone at Chestnut Tree House about how the children and their families have enjoyed their new Cinema Room and I know that many more will do so in the future. At the opening evening there were 5 children in wheelchairs, and another 15 or so people watching the film and we could have fitted more in!!

Finally, my thanks to must go again to Iain Brown at Kensington Home Technology and all the manufacturers that supported the project – I can confidently say that your efforts, and combined generosity, will make a difference to all those that use the room for many years to come..., and this is something that we should all be very proud of... 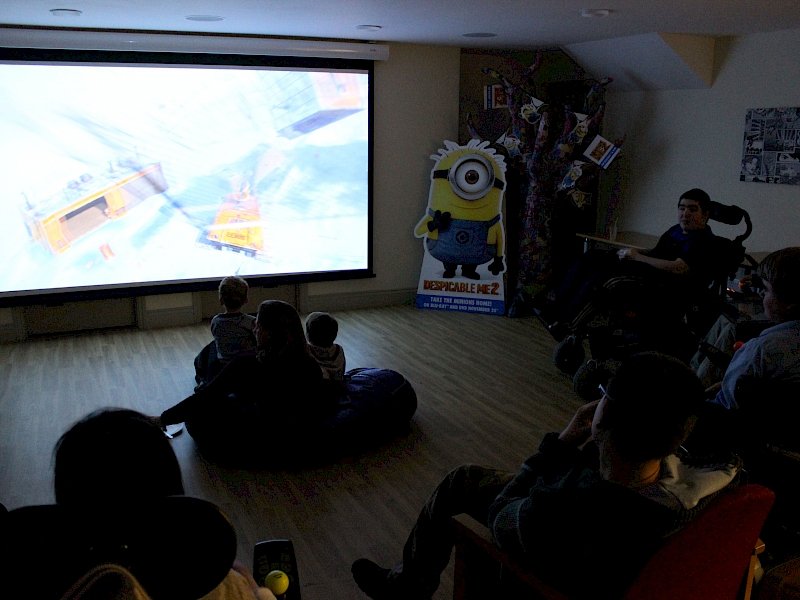