The ethos at Derian House is to make sure that every child and young person who comes to Derian is able to make the very most of the time they have.

The hospice has a hydrotherapy pool, sensory room, soft play, large inclusive playground suitable for wheelchair-users, a sensory garden full of the sights, smells and textures of nature, and now they have a state of the art cinema room.

At Derian House the whole family is offered a framework of support; with support for siblings, a grandparents bereavement group, and counselling sessions for families for as long as they need it.

Despite the nature of the work, Derian House is not a sad place; the corridors are full of joy and laughter as staff do everything in their power to make sure the children and their families make precious memories together. Every day is an opportunity to add some sparkle to the lives of those that need them.

On September 22nd 2014 Stephen Nevison from Intuitive Homes contacted me saying that he had been meaning to contact me for a couple of years after having read about the work of Together For Cinema in an article by Inside Hi-Fi in 2012. He expressed his interest in getting involved and asked me to let him know if we had any installations within striking distance of the North-West that he could help with. I duly logged his interest but sadly didn’t have a relevant project.

Early in 2018 Stephen contacted me again and mentioned that he knew of a children’s hospice local to him that might be interested in having a cinema room installed. We had various discussions but sadly nothing came of this… A few months later, in August of 2018, I was contacted directly by the Events and Promotions Manager at Derian House Children’s Hospice in Chorley, Lancashire, who had come across the Together For Cinema project via the Together For Short Lives internal newsletter. We spoke at length and with a major refurbishment about to start at Derian House it soon became apparent that the timing was perfect for us to discuss the possibility of installing a cinema room facility as part of the refurbishment. With a top end CEDIA installer ready to take on the installation we were pretty much ready to go!

This is all outlined above but was made easier by the industry PR and media support from the likes of Wildwood PR and Inside Hi-Fi, as well as the backing and reporting by Together For Short Lives.

With Stephen being located close to Derian House it was he who met with the Derian House team and also their architect who was overseeing the refurbishment. With the cinema room being a last minute addition to the plans he was keen to understand exactly what we were proposing and hence plan it in accordingly.

This meeting took place on September 3rd, 2018 and couldn’t have gone better. Stephen identified a perfect location for the cinema room and Derian House were delighted… The following day Stephen sent me a preferred product list that he was hoping to install and his comment to me was ‘Let me know your thoughts and don’t be shy of telling me I'm going overboard - I just thought I may as well start off aiming high!’ High indeed… and this installation quickly became the highest value install that Together For Cinema had taken on. To find out what value…, read on…

After realising the challenge to generate tens of thousands of pounds worth of equipment Stephen and I went into research mode to see if it was feasible. With both of us having good contacts, and with Together For Cinema being recognised as an industry backed charitable project, it soon became apparent that we could achieve what we were looking to generate.

We began ‘gathering’ in earnest in October and this process took several months. The refurbishment took time to complete and hence we had the luxury of time to gather the right products. Support from some old favourites such as Arcam, Crestron, Epson, Kaleidescape, Lutron, Middle Atlantic and Projector Point, as well as new donations from Artcoustic and Starscape completed the ‘product gathering’ and we were ready to go, pending clearance from the architect and Derian House.

Over the past 10 years Together For Cinema has become increasingly recognised as a positive industry movement and it’s great to work in an industry that is so receptive to supporting such a worthwhile cause. I don’t like to single out specific companies but for this install I would like to mention Artcoustic, Lutron and Starscape who really stepped up and donated a great deal of product and really helped make the end result what it is. Credit and thanks of course to all…!!

With building work schedules as they were, the Intuitive team almost had to be ‘on call’ as and when the Project Manager needed them to come in.

Completion was on Tuesday 27th August with final sign off on Wednesday 28th August, 2019

Also present, and most importantly, we had Francesca and Amelie, two friends who met at Derian House Children’s Hospice, and their families. Together they were the very first people to enjoy the new cinema room, watching a screening of The Greatest Showman. Both parents were delighted with the new facility and were very willing to explain what a difference the new cinema room would make to them and their children for the time they spent at Derian House.

Actor Ben Batt, who is from Wigan, and currently best known for his role as Joe Pritchard in Shameless, cut the ribbon to officially open ‘Derian at the Movies’. This was followed by short speeches from David Robinson (CEO at Derian House), Ian Morrish (Founder of Together For Cinema) and Stephen Nevison (Director of Intuitive Homes).

BBC North West were also present and kindly gave this installation a 2 minute piece on the evening programme of BBC North West.

I had contacted Ian a couple of times over the years as it seemed like such a fantastic cause and whilst handing over a completed project to an excited homeowner can be very rewarding, it doesn't offer the chance to 'give back' to those less fortunate. Together for Cinema seemed like the perfect way to use our skills to do something that would have a huge positive impact so I was ecstatic when Ian came to me with a suggestion of a hospice not too far away that was in the process of a renovation - it was a perfect fit!

After an initial meeting with David, Miriam and Luke from Derian house I wasn't really sure how to start as usually we have a client with either a budget or required functionality in mind. In this case we had neither so I just thought I wouldn't hold back and we set off to try and make this a really special space. After leaving site today where I did the final finishing touches like the movie posters, popcorn machine and bean bags I can say I'm incredibly proud of the results we have achieved and can't wait for the children and families to use it.

I am so grateful to all of the manufacturers who have donated products and would want to give a special thanks to the ones who really went over and above what anyone could have expected and made my initial wish-list into a reality. It's also been an absolute pleasure working at Derian as all of the staff have been so accommodating and lovely to be around.

I know that everyone has been really excited to use the room but each time I felt we could add something with wow factor or confirmed a new donation from a manufacturer, David and the team have been so patient. Each time we expanded the scope and pushed back the estimated completion date, everyone was just happy to make the room as amazing as we possibly could.

This has been an incredible experience so far and I'm really looking forward to the years of supporting and working with Derian House in the future.

“We are absolutely blown away by the generosity of Together For Cinema and all the suppliers who have donated products to make Derian at the Movies a reality. Stephen Nevison and the team from Intuitive Homes have gone above and beyond our wildest dreams to create a beautiful cinema room that will make a huge difference to the children, young people and families who come to Derian House.

“When you have a child with a life-limiting condition, simple things such as going to the cinema as a family can often seem impossible. Juggling accessibility issues, care needs and the needs of siblings means that our families often miss out.

“At Derian House, we do our very best to ensure our families get the same opportunities as everyone else. When I asked our Events and Promotions Manager to look into cinema options, I had no idea if it would even be possible. Together For Cinema is a fantastic charity and we are so grateful to have received this wonderful gift of a fully accessible cinema room. Our families can now book in for movie nights – complete with popcorn and snacks - enjoying precious time together making memories. Thank you!”

• Middle Atlantic (Racking): Racking, Shelving and other items as required.

On top of the list above many other products and accessories were generously donated by Intuitive Homes.

• Ian Morrish (Founder of Together For Cinema)

• All the manufacturers and distributors that supplied the necessary product, all of whom have already been mentioned in the Kit List above…

THANK YOU…, you have helped make a real difference at Derian House Children’s Hospice!

All products and associated services were sourced, supplied and installed free of any charge. The approximate total cost of the install, including consultation, installation, products and any other associated costs would normally have been in the region of £75,000 for an end user price.

For Together For Cinema, this installation was our 22nd completed cinema room in a children’s hospice or respite home. Number 23 will follow soon and is located in High Barnet in North London. Our final installations, before CEDIA take over, will be at Milton in Cambridgeshire and finally Chertsey in Surrey. Our original target of 25 cinema rooms to be completed by 2020 should now be achieved by the end of 2019.

The cinema room at Derian House has been largely managed and made to happen by Stephen Nevison of Intuitive Homes. His passion and drive to help has made this installation a smooth and well managed process with work actioned as and when it was possible to get it done. When fitting in charitable work around your day to day tasks there are times when it simply cannot take priority, this however didn’t seem to be the case with this installation. I reckon we can put this down to excellent time management!

Stephen also recruited assistance in areas that needed specific expertise and thanks must go to all involved, but particularly to Stephen for managing the installation so well. The end result is a cinema room that will make a difference at Derian House for many years to come.

Lots of us in the AV industry do many things to help others, be it raising money, offering services or products free of charge etc… Many of us also think ‘I really should do something to help…’ or ‘I wonder if I could make a difference’, well, next time you do…, do it! You’ll feel good about it and you’ll help others, and ultimately our privileged industry can give a little more back to those less fortunate. This can only be a good thing… 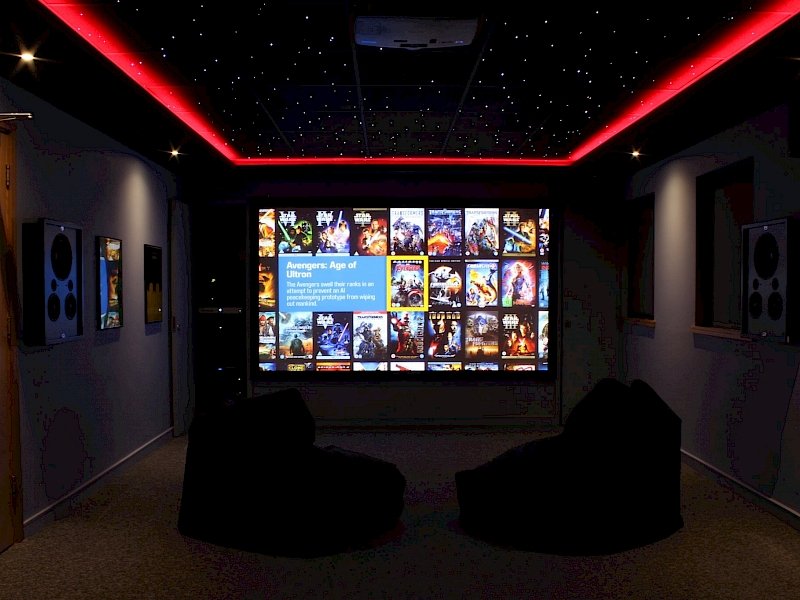 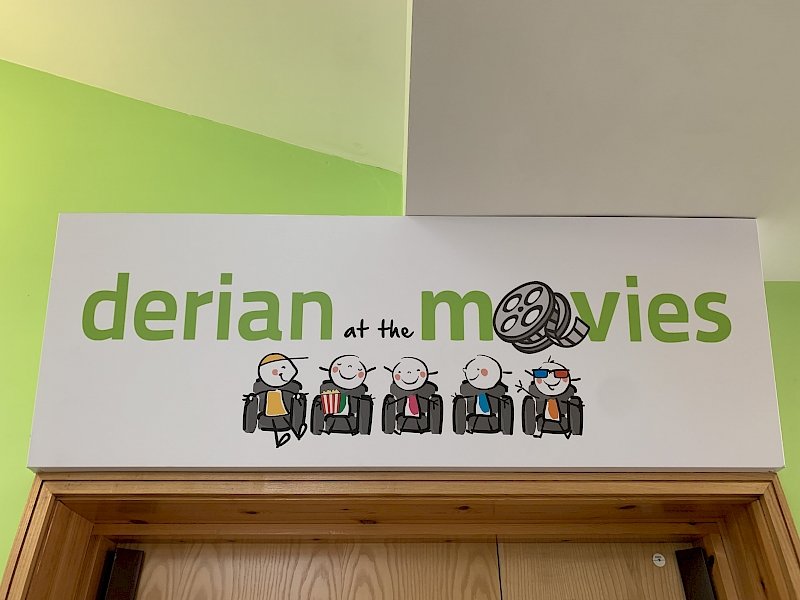 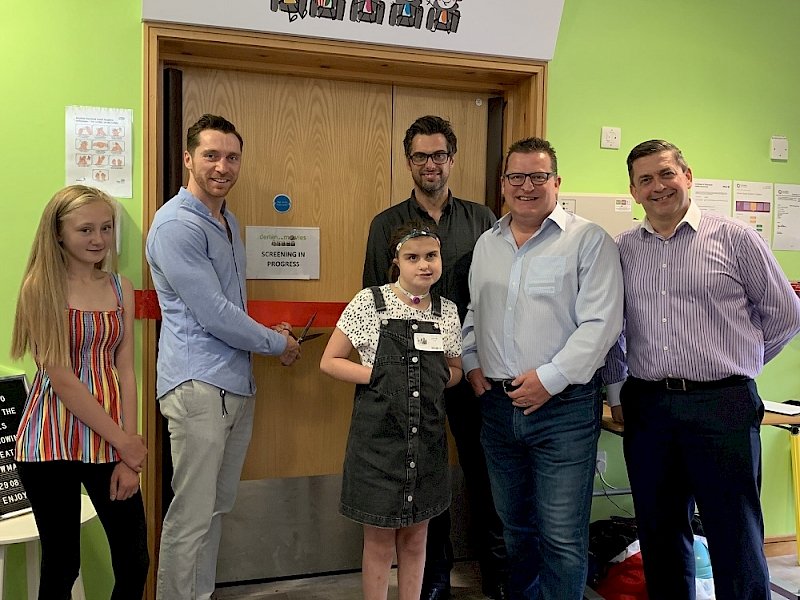 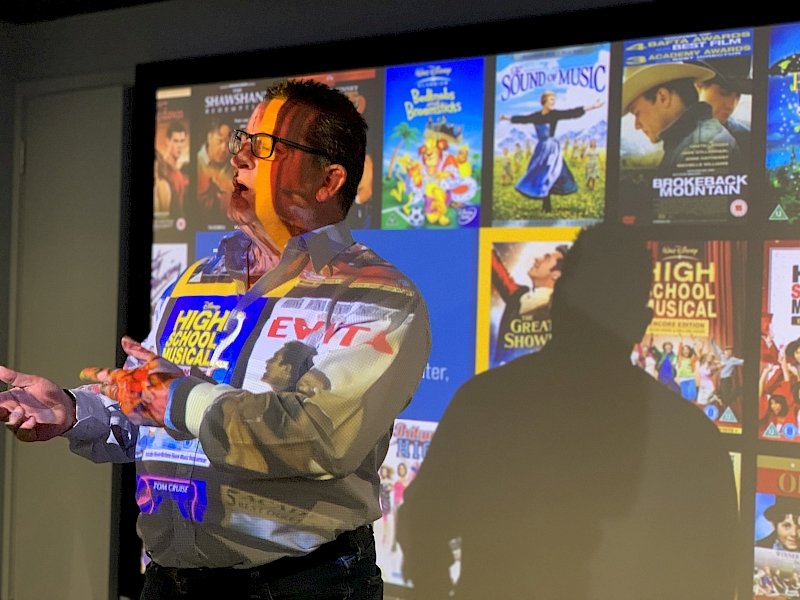 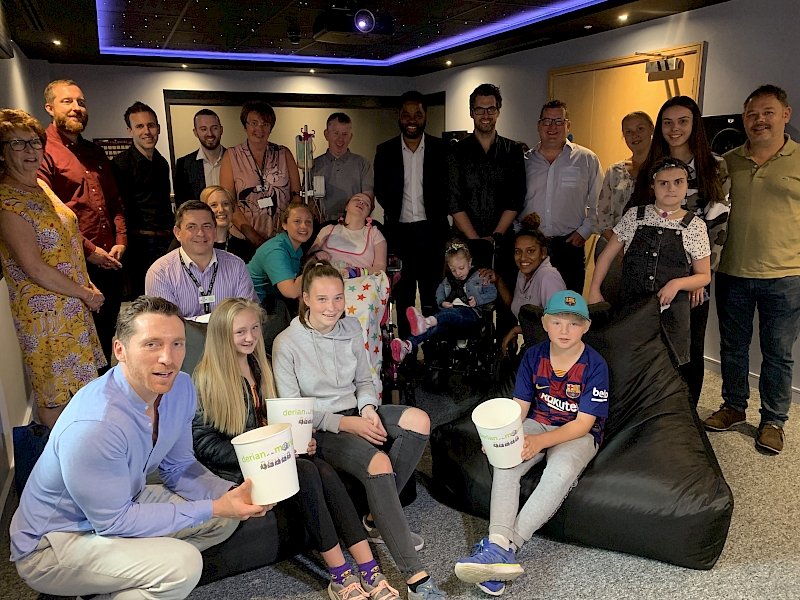 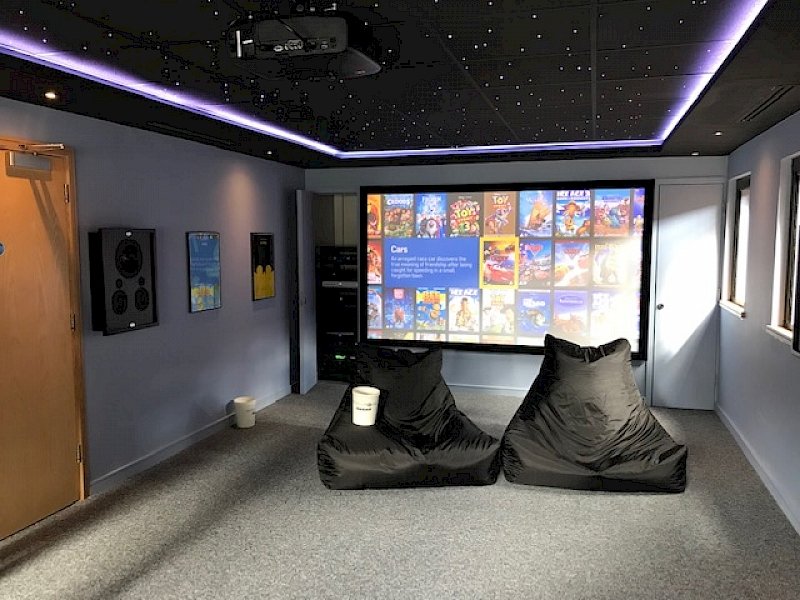 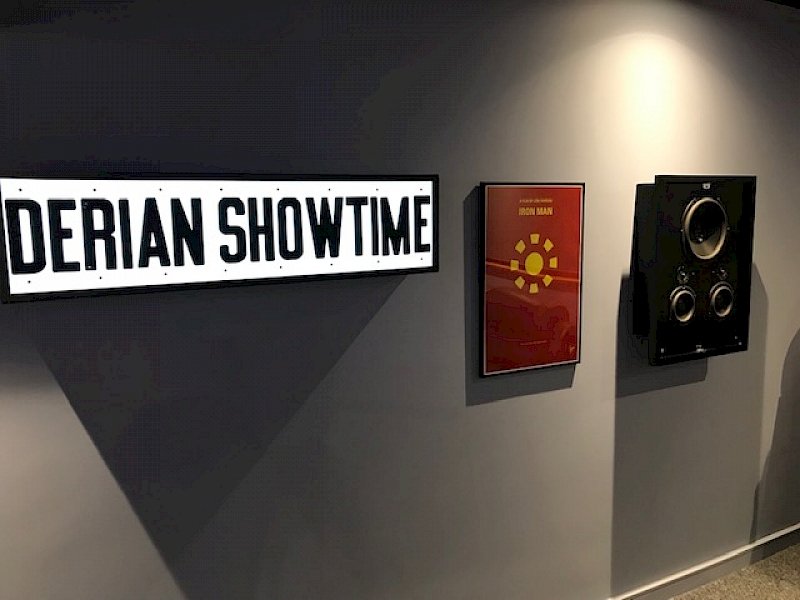