St.Oswald’s is located in Gosforth, just a little north of Newcastle and is part of the Together For Short Lives group, formerly known as Children’s Hospices UK.

Having been working with the Together For Short Lives group since 2010, and having completed four home cinema installations in 2011, the Together For Short Lives group had agreed to report on this success in their monthly newsletter that is sent to all of their 47 children’s hospices. This was sent early in 2012 and the response was most encouraging with 7 hospices replying to me expressing their interest in having the AV industry help to install a home cinema room. Most of those that replied had heard of the work that we as an industry have been doing so rather than it being a ‘semi-believable’ offer I think they were more than aware that it was a very real and serious offer of assistance. It was in April 2012 that Jane Hamblin, Facilities Manager at St.Oswald’s, contacted me and we agreed to do what we could..., pending finding an installer and generating the suitable products required.

As one of the relevant media in our industry, InsideCI had been updated with our activity over the last two years, and I’m delighted to say had very kindly given us some excellent coverage on their pages. David Slater, the publisher, had mentioned in the past that he had an install company in Newcastle called DSE Digital and he would be keen to help if he could... Therefore when it was confirmed that one of the installs was going to be carried out in Newcastle upon Tyne, I approached David and he was more than happy to help. Dave has been installing home cinemas for the last 12 years so was an ideal company to take on the St Oswald’s install. David is also the publisher of on-line magazine Inside CI, and so was best placed to support me in talking to manufacturers on donating the equipment.

Soon after this communication, on Wednesday 19th September, Ian Morrish and David Slater visited the hospice. The visit went very well and it was clear there was one particular room that was suitable for the install...

During the site visit we decided to go for front projection with drop down electric screen, the room had a south facing window so we had to specify a black out blind to make sure that we could darken down the room enough to give a good contrast of projected image. A Lutron blind and lighting system was specified for ease of use as well as a good quality blind mechanism. We opted for the control option from Demopad making it easy for both the children and staff to operate the cinema.

David had a couple of pieces that he was happy to donate directly (I think I helped tidy his stock room up actually!), and I already had promises of support from some relevant companies so these products were selected as ‘preferred’. The kit list completed it was time for us both to make it happen...

As mentioned above David had some kit he was happy to donate and I had a few promises ‘in the bank’ so we didn’t have too many items that we needed to generate, though there were one or two high price items that may prove difficult to get donated...

Projectors have come down in price over the last couple of years but a good 1080p unit will still cost you £2500. We approached Epson UK for the donation of the projector and were delighted when they came back with an EH-TW9000 projector as the quality from these units is sublime. Speakers and subwoofers were next on list and as the install was the perfect candidate for in-ceiling speakers Current Audio were approached, and had no hesitation in letting us select what we needed. As did Redline Distribution when we approached them for a Velodyne subwoofer. We needed control of the cinema to be very simple so we approached Mike Cain, MD of Demopad, to donate the software app and IP to IR controller. DSE DIGITAL donated IPAD with all the little things needed to run the cinema like cables. Following a recent meeting I had had with Lutron I was able to source the lighting control and also the automated blackout blind that was required.

All in all, with the industry contacts that David and I had, the growing industry awareness of this work, and some wonderful generosity, it was reasonably straightforward to generate the product required.

“The install was carried out over a two day window, we had to do low voltage as well as mains voltage for power supplies for the projector and screen as well as subwoofer and amp. The drop down ceiling provided easy excess for the cabling. With the control of the system requiring internet access, we also had to tap into the IT infrastructure. With the source being Blu-ray this was fed through the amp then up to projector. The projector has up/down and left/right lens shift which makes siting of the projector very simple, you are no longer restricted to where the projector has to sit on the ceiling. With all cabling complete it was onto second fix of speakers and screen. It was a long and hard first day, but all that was left come the second day was the setting up of amp sound and the programming of the IPAD to operate the system. This is always my favourite part of the install as it always makes you smile when the 5 speakers and subwoofer kick into action. Cinema installs are one of the fun types of installations within CI.”

“When we were initially offered the opportunity to have the home cinema system installed we were very excited but unsure whether it would be any better than our wide screen TV.  However, as soon as the system was installed we realised just how fabulous it is. We are truly thrilled with the donation and I’m sure our children, young adults and families will get hours of enjoyment from the new system. The staff are very excited about hosting film-nights for our families, particularly for those children who may not be able to easily access the cinema.

We are absolutely delighted with the end result and would like to say a huge thank you to Ian Morrish, and also David Slater, from DSE Digital, for their kindness.”

“Well, what can we say, WOW! I know that we will be seeing you next week to say a proper “thank you”, but in the meantime I would like to say a huge thank you on behalf of all the team here for what you have done for us! I have just been in to see the Home Cinema set up and it is just amazing! The trouble is, we all want one now, complete with bar of course…….

The team are so excited and LOVE it, and can’t wait for the kids to see it too. I understand that a few of the teenagers were going in later this afternoon, so I’ll get their feedback for next week!

Dave, huge thanks to you also as I understand that you were a star not only in carrying out an extremely high standard of installation, but also ensuring there was as little disruption as possible.

We all look forward to seeing you next week!”

“We at DSE Digital were delighted to be involved with this install; the reaction to the finished job from the staff and kids was amazing. I take my hat off to Ian Morrish for being able to pull together 4 of these projects a year, as it is no mean feat. I understand more about the whole Together for Short Lives charity appeal and it is so important for us as an industry to get involved - if we can share a little of this great technology it has to be good ”

· Accessories: All cables, a projector bracket and screen trigger (donated by DSE Digital)

All products and services were sourced, supplied and installed free of any charge. The approximate total cost of the install, including consultation, installation, products and any other associated costs would normally have been in the region of £11,500 for an end user price.

DSE Digital have also agreed be available for any servicing and technical queries post install.

Yet another wonderful result and one that was made much easier thanks to the assistance and generosity of Dave Slater and his team from DSE Digital. Again, the industry ‘came up with the goods’ and I thank all manufacturers and distributors that have contributed to the success of this project. I’m only sorry that I can’t bottle the joy that we felt when the cinema was opened... The Chief Executive at St.Oswald’s was heard trying to monopolise the room for a Star Trek evening with the children so I think it will be used on a regular basis – if not only for the Chief Exec and his Trekkie friends!!

The room will be appreciated and used for years to come and again, and all involved can be very proud of what has been achieved... 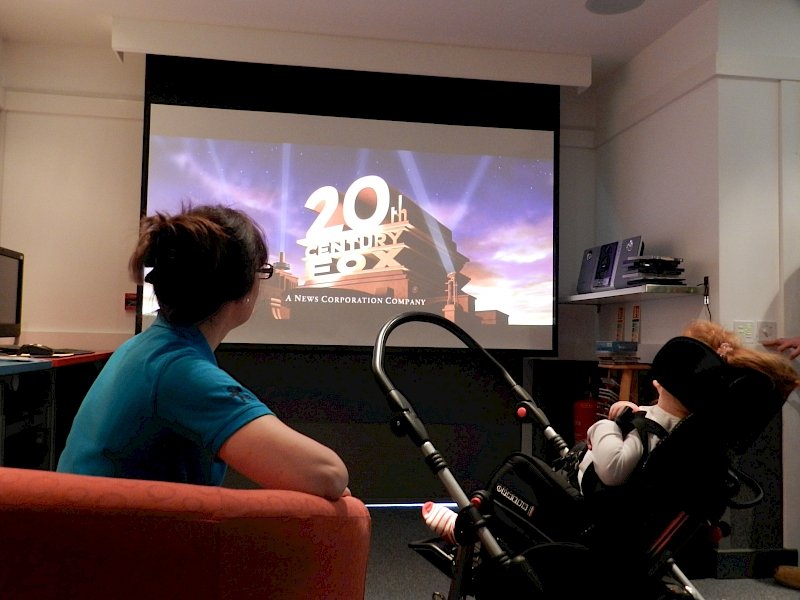