The Woodlands was acquired in November 2017 and amazingly, after significant renovation, opened in August 2018. It is located in Crowthorne in Berkshire and is part of Sebastian’s Action Trust, the trust having been set up by Sebastian’s Mum, an amazing woman called Jane Gates. Jane lost Sebastian on Christmas Eve 2003 but not before he himself had started the fundraising ball rolling to create a place of respite where children with life limiting conditions could go to and enjoy, as well as giving parents, siblings and carers a break. Sebastian was a typical 9 year old but his determination and maturity in the face of adversity made him a very special 9 year old…

The Woodlands is the second location that we have worked with Jane on, the first being The Bluebells near Basingstoke. Both installations have been completed in record time and quite frankly are two of the best installations that Together For Cinema has been associated with.

Jane fulfilled Sebastian’s vision and more and more children will enjoy time at both The Bluebells and The Woodlands. Jane is committed to continually developing the properties to be as good as they can be and to getting as close as she can to making every second a happy one for all that stay and visit.

Her achievements have been astounding and in 2012 she and her husband Michael won a Special Recognition Award at the Pride of Britain Awards, presented to them by David Cameron. This was followed by Jane being awarded an OBE in the New Year’s Honours list for 2015…, a truly remarkable woman…

The care offered at The Woodlands is mainly respite and short breaks, and the support given extends to the whole family, into bereavement and beyond for as long as each family needs it. As Jane often says “we try to add life to days…”

Having worked with Jane on The Bluebells, and having being swept along with her passion and enthusiasm it was an easy decision to offer our services again for The Woodlands. Interestingly enough though, the original contact was made following a chance meeting by my parents with someone connected with Sebastian’s Action Trust and their recommendation that I contact Jane. The rest, and two cinema rooms later, is as they say…, history…

Well, this was the easiest process of them all… Shaun Wilson of KNEKTD Integrated Media and Bruno Carvalho of LBC Contractors, had recently completed the installation at The Bluebells and had already committed to help Jane at The Woodlands.

With Shaun’s energy and passion already displayed in getting The Bluebell’s cinema room finalised the initial meeting was actually a measure, design and specify meeting. This quickly took us to the position of considering which product manufacturers and distributors to approach to gather want we needed. Shaun already had LBC Contractors on board and I knew the industry would react quickly and positively…

With Together For Cinema being increasingly recognised as a positive industry movement it’s become easier over the years to source the products required to create these cinema rooms. Several companies have become ‘Go To’ for certain products and others are called upon intermittently to supply more specific items. Either way, and however it is achieved, the industry has been incredibly supportive with both manufacturers and distributors regularly sending items as required, and many of them with a significant price tag.

As with all of our installations the kit list was fairly ambitious, particularly as we needed to secure all of the product free of any charge. With no money ever changing hands at Together For Cinema everything needs to be donated, be it product, time or anything else required!

On this occasion, as with The Bluebells, both Shaun and I were heavily involved in securing the product and I think we both surprised each other with how quickly everything was secured and delivered to KNEKTD’s offices in South London.

On Thursday 9th August there was an Opening Reception at The Woodlands with over 20 people in attendance, including several of the children, and their families, from the Woodlands who were very impressed with their new cinema room! A screening of Peter Rabbit captivated them all while we stood at the back of the room and reflected on the difference this new cinema room can make to their lives. One Mum wanted it known that this was the first time her child had ever been to ‘the cinema’ and that they both had a great time, and were looking forward to more films in the future…

Staff at the Woodlands were also in attendance and laid on a fabulous tea and cakes spread for us though I suspect the kids had most of it after the film finished!! It was a wonderful day and there were three short speeches, one by Jane Gates (Founder of The Woodlands), one by Ian Morrish (Founder of Together For Cinema) and one by Shaun Wilson (MD of KNEKTD).

Jane’s insight into how The Woodland’s came about as a result of her journey captivated all those that attended. I think it left us feeling quite humble and also left us considering what else could we do to help.

“My beautiful daughter Ava, who is 1 year old now, has been the inspiration behind this whole project. I started to look at ways to get involved in a worthwhile installation back in September last year and came across Together For Cinema. Luckily, this was a few weeks before the CEDIA Awards, so I was able to meet Ian there and it was there he first introduced the thought of installing a Home Cinema at The Bluebells Centre, and this of course led onto The Woodlands.

For both installs we visited the centre and having been shown around, the next step was to ensure we could get hold of the right equipment and between Ian and myself, we were lucky enough to be inundated with offers from our supplier friends. We’ve been truly touched by the amount of people who have come forward to donate their time, products and expertise. This project really reminded me of what is important in life and when everyone pulls together for a good cause, amazing things really can be achieved! I’m incredibly proud of the end results and I’m so pleased we’ve been able to create a fun and interactive room for the children and their families at both The Bluebells and The Woodlands.

The people of Sebastain Action Trust have created such two amazing centres and made it so easy for us to get involved and work with them on both projects. We hope the Cinemas provides many hours of entertainment for those who visit.”

and… “As always it has been a real pleasure being able to put our efforts towards such an amazing charity. The whole team are really happy and honored by both your kind words.

Ian, thinks for finding us! Glad to know we have been able to exceed your expectations. You have a created an amazing idea and charity in Together For Cinemas. It has been one of the greatest feelings being able to use our skills to such a good cause.

Jane, you are a true inspiration to us all. From the moment I heard you talking about Sebastians Action Trust I felt your passion and determination and it motivated me even more! It has been an absolute pleasure being involved in making the respites a little more fun and exciting for all your beneficiaries. Thank you for making us feel so welcome. We are always around if you need anything.”

In an email sent to Shaun Wilson and myself on 10th August… “Thank you both once again for coming yesterday to The Woodlands to celebrate the fantastic facility you have created for our beneficiaries. It was lovely to meet so many of the individuals who have additionally played a part in creating our cinema and to have the opportunity to thank them personally. You have both given so much to our charity; I know that luck was certainly with us when you chose to support our initiatives. Just for starters, you managed to send some very happy children home last night, having enjoyed a cinema experience which for one child was actually the first time. It is no doubt a far cry from the installations you complete on a daily basis but for us, and our beneficiaries, your contribution is literally life changing in that it gives families a chance to enjoy simple, everyday pastimes that we, who do not live with a life-limiting condition, often take for granted.”

On top of the list above many other products and accessories were generously donated by KNEKTD and LBC Contractors.

THANK YOU to you all!! …you have all helped create a little bit of magic at The Woodlands.

All products, carpentry, room design and associated services were sourced, supplied and installed free of any charge. The approximate total cost of the install, including consultation, installation, products and any other associated costs would normally have been in the region of £25,000 for an end user price.

For Together For Cinema, this installation was actually our 21st completed cinema room in a children’s hospice or respite home. Numbers 22 to 25 will follow soon and I suspect will be in Chorley, Manchester, Barnet and Quidenham, near Thetford in Norfolk. Our target of 25 cinema rooms to be completed by 2020 is well within reach!

The cinema room at The Woodlands is Shaun and Bruno’s second installation and amazingly is as good as their first one! Thanks must go to all involved, but particularly to Shaun who project managed and simply got on with it! His efforts, and yet again, the generosity of all concerned, will make a difference to The Woodlands for many years to come.

We all work in this commercial industry serving those fortunate enough to be able to afford some of our fabulous products and services. Sometimes an installer might walk out of a £200,000 installation never having met the end user. Congratulations on the tens of thousands of pounds of profit and this is why we go to work, to earn money to pay bills etc… However, when does an installer come away feeling that he or she has really made a difference and genuinely changed people’s lives. Shaun’s had this feeling twice and I know how much satisfaction it has given him. See if there’s someone local you could help – I promise you value and return beyond most of your paid for jobs!!

Well done our industry – another installation to be very proud of! 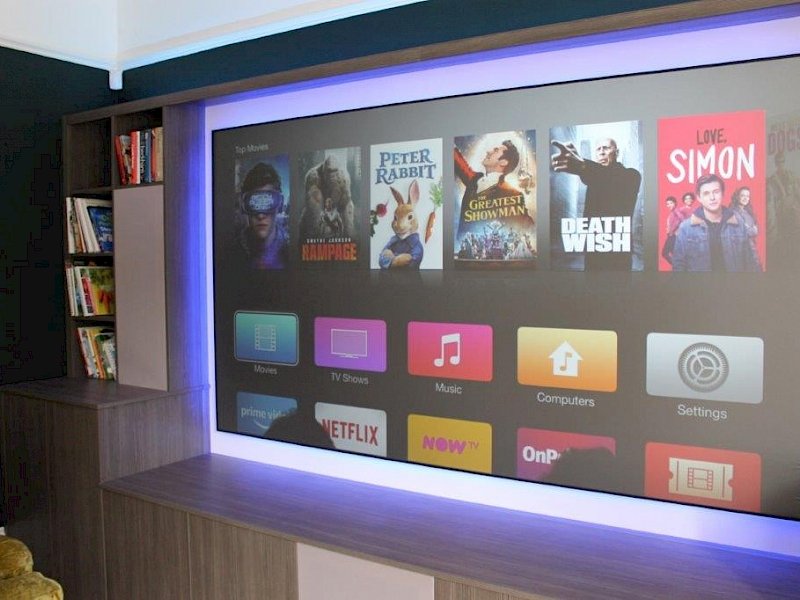