Ty Hafan is located very near the coast in Sully, just a little west of Cardiff and is part of the Together For Short Lives group, formerly known as Children’s Hospices UK.

We have been working with the Together For Short Lives group since 2010, and have now completed seven home cinema installations. To inform their members the Together For Short Lives group agreed to report on these developments in their monthly newsletter that is sent to all of their 47 children’s hospices. One of these was sent early in 2012 and Frank Ady who is the Head of Business & Community Fundraising at Ty Hafan called me on April 10th to see if what we were offering might be an option for Ty Hafan. I outlined that it was and briefed him on some of the other projects that we had completed and the very next day I received a written proposal from Frank outlining how he felt it would help Ty Hafan and how and where it would be utilised. The request fitted exactly with what I felt we could achieve for them and of course the next stage was to find a suitable installer and of course find some products…

Having worked with CEDIA for 8 years and ISE for almost 6 years I am fortunate to know many people in our industry and one of these, Gordon Innocent, from RGB Communications, had already supported some of our previous installations with Middle Atlantic racks. However, Gordon had recently expressed an interest in taking over an installation for me and basically managing the install and also donating as many products as he could.

In passing I mentioned the request from Ty Hafan in Cardiff and as Gordon lives between Cardiff and the RGB offices in Hungerford he was keen to help. We arranged a meeting on site for Thursday 30th August, and Frank Ady was on hand to show us round and to outline the vision that he had for the current Conference and Training Room.

Initially Gordon and I had a concern that we felt the equipment may not be used as much as we would like for the children and their families..., however we really shouldn’t have been concerned... Frank had big plans for Cinema Club nights, film evenings, gaming sessions, live sports coverage etc... And with the room being large and with easy access it could easily accommodate several wheelchairs and beds if required.

During the site visit we decided to go for front projection onto a large white wall, the room had several Velux windows and these could obviously have proven a contrast problem so Frank at Ty Hafan arranged to have blackout blinds installed on all these windows. With the room size being pretty large we had the scope to use a pretty high powered projector and substantial speaker system. Taking into consideration that the room was multi-purpose and would have high usage we needed to ensure that the equipment was adaptable and able to be used for films, gaming, conferences, training, computer presentations etc...

As mentioned above, Gordon was keen to supply as much of the equipment as he could and this he assured me that he could do.., and he certainly delivered!! Working with the manufacturers whose products he distributes Gordon was able to source a high specification projector from NEC, a projector mount from Premier Mounts, a 5.1 speaker package from RBH, racking from Middle Atlantic and cables (and one or two other pieces) from Kramer. All equipment supplied was donated free of any charge and was perfect for this particular install.

There were however two items that Gordon wasn’t able to source, one being the AV Receiver and the other being the Blu-Ray player. The AV Receiver proved to be pretty straightforward as Scott Campbell from Arcam (during another one of those industry chats) had promised to supply one AV Receiver every year to the cause so all it took was a quick phone call and this was secured.

The Blu-Ray player was sourced locally from Sony UK TEC in Cardiff. They had supported Ty Hafan before and Frank from the hospice quite rightly felt we should approach them first. This we did and after a little form filling and following up we were promised the Blu-Ray player which Frank picked up.

All in all, with the industry contacts that Gordon and I had, the growing industry awareness of this work, and some wonderful generosity, it was reasonably straightforward to generate the product required.

“Our goal was to create a multi-purpose environment for the children to watch movies & play games and for presentations & training use. In simple terms, that involved a projector & mount, an equipment rack, cabling, trunking and wall plates.

Because the installation was so close to where I live in South Wales, I decided that I should help out. What could go wrong? Having not physically done an AV installation for many years, this has turned out to have been a very interesting and valuable experience. Designing the system from scratch, not just the kit we supply, but trunking, cables, face plates, etc. was a reminder of just how important it is to get it right first time and how just in time logistics only works if your suppliers ship exactly what you asked for, to where you wanted it and on time. Otherwise its trips to a hardware store, more trips to site and a delayed installation.  We did have our problems, not with our own company I’m pleased to say. The most memorable points were discovering that the boxed in RSJ wasn’t an RSJ at all. It was two long spans of wood with a gap between. With a bit of lateral thinking and a flexible mount, we were fine. The gap proved rather handy to hide all the cables. Somehow managing to feed the speaker cables into a gap in the ceiling void in the next room was quite frustrating, funny afterwards over a beer though.

Overall, we achieved what we set out to do, in the 3 days we had allowed and the end result looks & sounds great.”

Final sign off was on Thursday 17th January, 2013, though 95% of the work was completed by Thursday 13th December.

Taking place on January 17th, 2013, this fast became quite a gathering... Gordon Innocent brought his wife Karen down as well as colleagues Caroline Britt, David Werrell and Drew Rogers. Ian Morrish arrived with his wife and two children, and Ty Hafan had about 60 workers and volunteers present as they were having some last minute planned training whilst using the equipment... This proved to be a great time for Gordon and Ian to answer questions and also hear feedback from several staff on why, related to their particular field of work, the cinema installation would be a great addition to the hospice. Personally for Gordon and Ian this was a very rewarding time as hearing specific comment from specific staff was fascinating and really made all the hard work more than worthwhile.

“The New Home Cinema installation has already had a massive impact with youngsters at the hospice.

I was sent this by Paul Fisher our Play Team worker after a recent test run of the new cinema with the Expendables 2!!!

‘The Expendables are back and this time it's personal... Guns, explosions and girls what can a young man ask for… Nothing I hear you say, well you would be wrong! How about all of the above blasted out of an astounding surround sound system and viewed on huge screen on the wall!!! That my friends is how it’s done!!’

‘WOW!!! This is a must see film for any action hero fan, It feels like I am actually in the movie!!!

I think that statement sums it up!!”

“Observations as a distributor: I can see clearly why it might be difficult to persuade installers to switch products. When you already know products well, you already know what’s in the box and it can make installations seem easier.

Opening boxes from a new manufacturer, means you aren’t quite sure what to expect, and can take valuable time to familiarise yourself with the contents and how they work. So, unless there’s a good reason, why put yourself through that? RGB's job is to offer products that make a switch worth-while and to successfully communicate the benefits the switch will deliver.

Having just done an installation, I am now far more able to picture the problems and issues our channel partners are likely to encounter. I can empathise with them and am better able to help them.

Those on the RGB sales desk team that haven’t actually done or helped out on an installation, should and will be doing so – soon!

Personally: Getting involved in this project has been a wonderful experience.  Initially it was something I just wanted to do. I knew we would get a feel good factor plus some decent PR. However, experiencing the generosity of our suppliers and the reaction from the children has been something really rather special.”

With Gordon Innocent taking main responsibility for managing the installation and gathering the product there was sure to be no cost to Ty Hafan. The end result was that all products and services were sourced, supplied and installed free of any charge. The approximate total cost of the install, including consultation, installation, products and any other associated costs would normally have been in the region of £10,000 for an end user price. RGB have also agreed to be available for any servicing and technical queries post install, therefore adding further value to the installation.

Another wonderful result and one that simply would not have taken place without the assistance of Gordon and his team from RGB Communications, and of course the continued generosity of several manufacturers.

As an industry this was our 8th Cinema Room installation into a Children’s Hospice and we will continue to try to create at least three a year for the next few years. 25 seems to be a general number to celebrate so let’s try and achieve this before 2020! Of course we can only do this with the continued assistance of manufacturers, distributors and installers so please let me know if you’re interested in helping out – I can assure you its very rewarding... 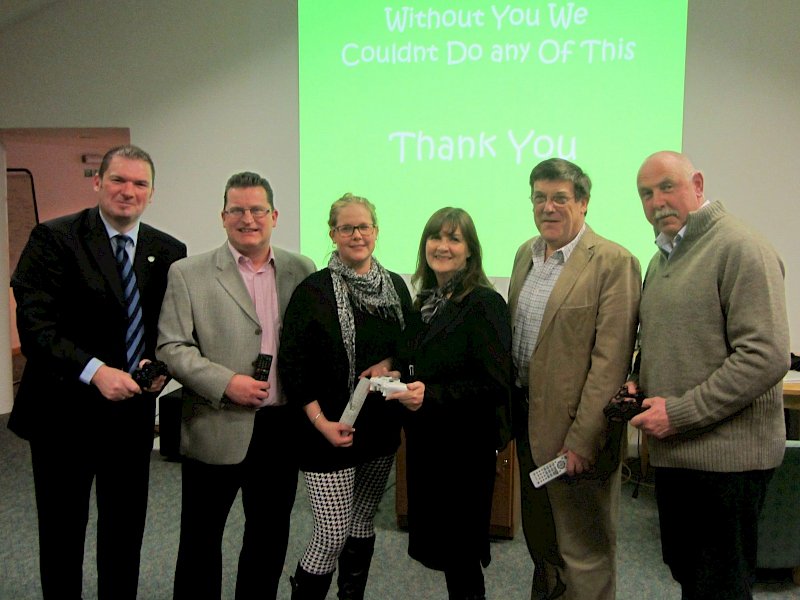